We've got over 150 people registered for Podcamp + Wordcamp Hawaii, but now and then we hear of someone who is going to be unavailable for the event. Not to worry! There are several other geek happenings you can attend in the coming weeks and months that will be covering similar topics. 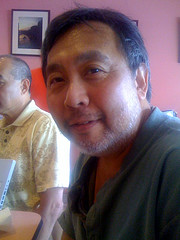 First let's start with the special Proclamation from Governor Lingle. Just look at the list of events on this page - it's enough to merit a special proclamation by the Governor of Hawaii declaring October 18 to 25, 2008 as Hawaii Geek Week (PDF of the application that has been approved).

We would like to give special thanks to HMAUS Secretary and Ambassador Eugene Villaluz who conceived of and executed this wonderful idea. Mahalo nui Eugene for including Podcamp + Wordcamp Hawaii in your proclamation. (Photo by Hawaii on Flickr.)

Mactoberfest
Saturday, October 18, 2008
A free annual event hosted by HMAUS (Hawaii Macintosh and Apple Users Society)
There will be several guest speakers plus a Buy and Sell table for computer gear, co-hosted by the Professional Photographers of Hawaii and the Pacific New Media Center at UH.
www.hmaus.com

I just learned about the Hawaii Geek Week blog being developed by Mark McMahon of Hawaii Web Consulting; there's more information over there too.

P.S. All community organizations are welcome to put out their organization flyers on our free nonprofit outreach table.